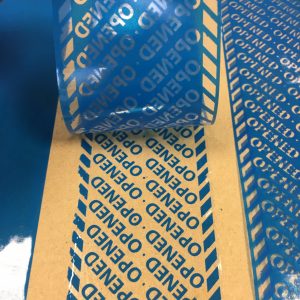 This blue tamper evident tape, DR491, featured on this page is covert, versatile and TSA-CCSP compliant.

The tamper evidence is designed to function within 60 seconds of application. DR491 looks like a standard blue packaging tape so provides simple, cost effective security without alerting people to the additional layer of product protection you have added.

When removed, these security tapes transfer all adhesive to the surface. After voiding, since most of adhesive remains on the surface (and little to none on the tape film), the tape film cannot be reused, which is an added security feature against unauthorized reuse of the tape.

This blue covert security tape is used as a deterrent and for detection through a quick visible check – if the tape is VOIDED the package has been tampered with.